As many of you are aware Arizona is the state with the dubious honor of warming at a faster rate than any other state in the union. Keep in mind that it frequently tops 100 degrees this time of year in the state and the highest recorded temperature in Arizona took place on June 29th 1994 in Lake Havasu City. The thermometer  reached an amazing 128 degrees that day and while it will not come close to that here in Tucson this week the weather is predicted to top out at 106 degrees today and then 107 tomorrow, followed by 108, 108 and finally a cool 101 degrees on Saturday. Coupled with this months record rainfall of .29 inches, that's right record rainfall, it can be difficult for the desert dwellers to find an adequate and reliable source of water. 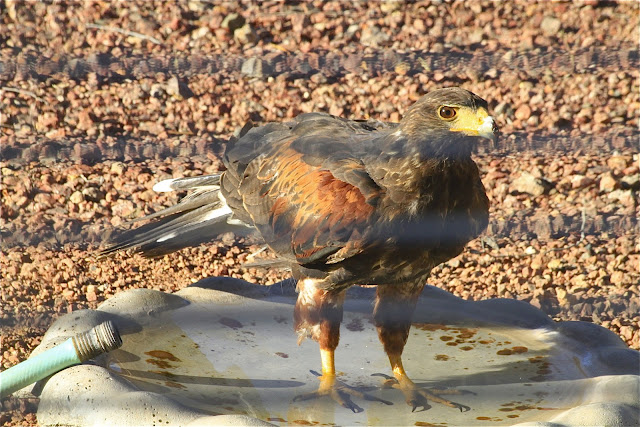 Injured Harris's Hawk that stopped by for a drink on a hot day.

Providing water via a shallow bird bath top laying on the ground has proved to be a welcome and vital tool to attract wildlife to our yard. Every morning at 4:45 when I open my front door to let in some fresh air there is a variety of song coming from the trees and shrubbery surrounding my little house here in the Sonoran Desert. Over the last couple of years we have had visits from coyote , deer, javalina, bobcat, cottontail, and hundreds of birds including entire families of gambel's quail, pyrrhuloxia, northern cardinal, curved-billed thrasher, brown cowbird, hooded oriole, harris's hawk, cooper's hawk, cactus wren, mockingbird, verdin's, green-tailed towhee, abert's towhee, least goldfinch, goldfinch, bullock's oriole, say's phoebe and many, many more. We also see many lizards, rattlesnakes, gopher snakes AKA bullsnake, scorpions, butterflies, bees, walking sticks, spiders and an occasional gila monster in and around our yard. 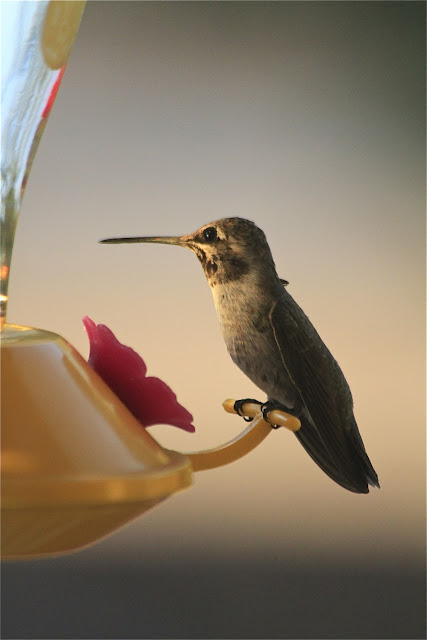 As I sit here and write this this morning I have also been treated to  both black-chinned and costa's hummingbirds at the feeder outside my window. This time of year hummingbirds do not like to share even though there is far more nectar than a hummer could consume in an entire summer. The aerial battles are amazing, with feats of flying that are death defying. Oddly no one seems to be deterred for too long and the same encounters are repeated over and over.
I use a mixture of sugar and water ( 4 parts water to 1 part sugar) boiled for a couple of minutes on the stove. This time of year it is necessary to change the food every other day due to the extreme heat. I do not use colorant and neither should you if you plan on feeding hummingbirds. Placing your feeder in the shade also helps as direct sun speeds up the degradation of the liquid.
Since placing the feeder outside the window we have also been visited by anna's, magnificent, and rufous hummers and have had numerous hummingbird fledglings raised in and around the yard. 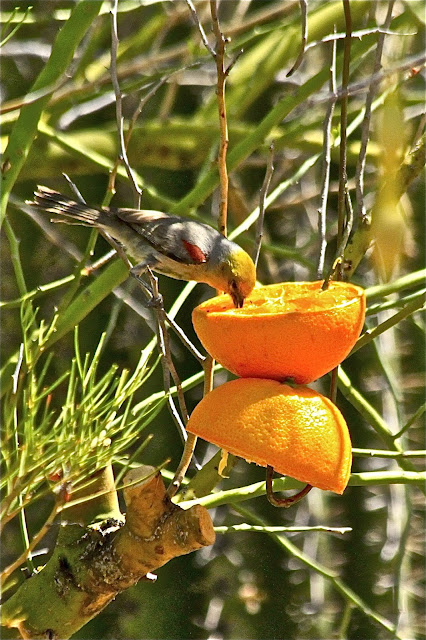 We make every effort to change the water a few times a day as birds have a tendency to drink, splash, poop and sometimes just sit in the water. In areas that are as dry as this one providing a source of clean water, a couple of hummingbird feeders and an orange cut in half and hung in a tree every couple of days will provide countless hours of entertainment for you and much needed hydration for your local wildlife. 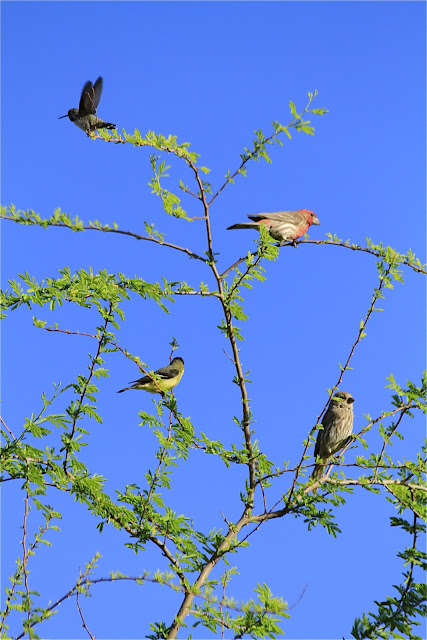